Everybody knows that for us Greeks, music and dancing is a big part of our culture and tradition. We sing and dance for the good times as well as the difficult times of our lives. The traditions of our ancestors are not only kept alive but they also continuously form and adapt to our way of living.
Traditional music wouldn’t maintain its strong presence in the culture if it weren’t for dedicated musicians. Both local musicians as well as famous musicians, like Domna Samiou and Simon Karras, there are people who are devoted to researching, recording, archiving and teaching traditional Greek music. 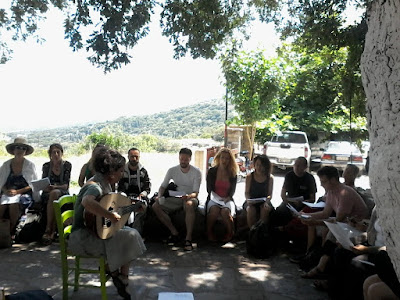 Katerina Papadopoulou, singer, oud player and music teacher, and Christiana Katsarou, Greek language and dancing teacher, continue this work today by teaching Greek singing and dancing, in Greece and also abroad.
Their “Chorotragoudẃ” seminars aim to keep our musical heritage alive and to spread it outside the Greek borders. GreekTV was there at their last seminar, which took part in Ikaria on June 27th – July 2nd. 20 participants from Greece, France, Italy and Switzerland had the chance to learn songs and dances from Ikaria, Chios, Samos, Rhodes and Minor Asia.
The classes were magical. The backdrop of the island’s beautiful scenery was the perfect setting for the musical experience! They took place at a traditional tavern in Nas, at the square of Akamatra village accompanied by the songs of the cicadas, at the unique Monastery of Theoktisti, at the panigyri of Agioi Apostoloi in Platani. 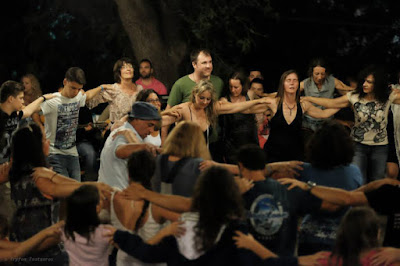 The local musicians were happy to share their stories about the island’s traditions, play their music and sing with the group of participants.Katerina Papadopoulou spoke with us about the seminar, Greek music traditions, and the island of Ikaria:
What is Chorotragoudẃ and which is the idea behind it?
Chorotragoudẃ is a singing as well as a dancing project, that focuses on the way people in Greece used to live, when singing and dancing was a part of their everyday lives. Additionally, the most proper way of learning Greek music, singing or dancing, is by combining all and not separating them.
How many people participate in Chorotragoudẃ and what are the participation criteria?
Each seminar has 15-20 students. Participation requires experienced singing.
How connected is singing and dancing in Greek traditional music?
Singing and dancing in Greek traditional music are connected and never separated. This is the most natural way of dealing with music as part of real life.
Do you think that music traditions are still alive in Greece? Is traditional music part of young people’s lives?
We are lucky to live in a country, where music traditions are alive, especially in the villages and the islands, where people are more “isolated” and in a way far from big cities and “civilization”. Young people live their tradition there and take active part in that.

Why did you choose the island of Ikaria for this seminar?
Ikaria has one of the most strong and alive music traditions in Greece, as well as many feasts during the year, where someone can participate and have a real taste of a living tradition. 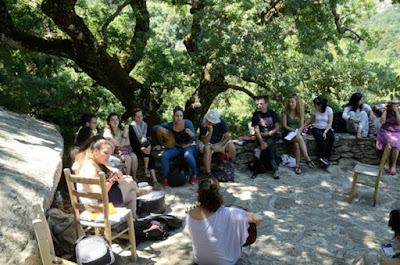 Are you planning another Chorotragoudẃ seminar soon? Where can interested participants get informed about similar future events?
The next one is not fixed yet but will soon be. Ikaria is a possible destination, as nobody can go there just once!
Facebook and personal mailing lists are our way of informing people about our actions and activities.
Follow Katerina Papadopoulou on Facebook to get informed about future seminars:https://www.facebook.com/katerina.papadopoulou.507 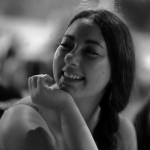 Here are some of my 2015 precious moments with my dancing friends and...
we're ready for the 2016 IkariaDance adventures!

in IKARIA, ARMENISTIS
- our Easter workshop  (30.4 - 7.5.2016)
with participants from all over Europe and Greece. Dancing, hiking, cooking, talking Greek in the inspiring springtime Ikaria!
- our annual summer IkariaDance event - workshop in late August shall be exceptional as it shall be accompanied with an excursion and "glendi" in Samos for those interested! (21. - 29.08.2016 and 29.- 30.8.2016 excursion to Samos)
www.ikariadance.com

some events from our friends' associations we are aware of already:

in Herakleion, CRETE: 09.04.2016
the annual dance performance of Chorospito under the artistic direction of Christos - Yanis- Nikos with dances from East Crete, Ikaria, Lesvos and Asia Minor. 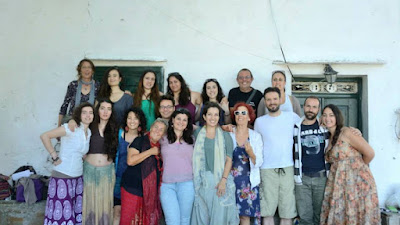 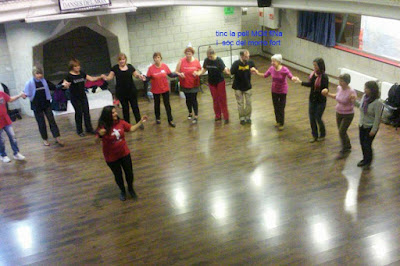 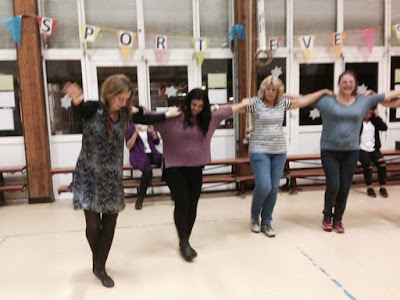 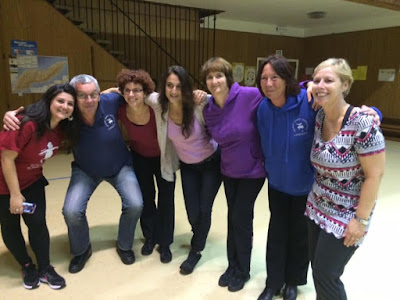 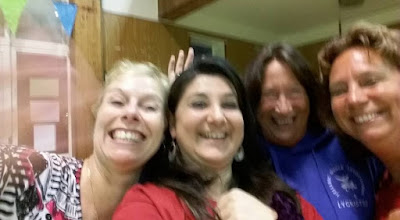 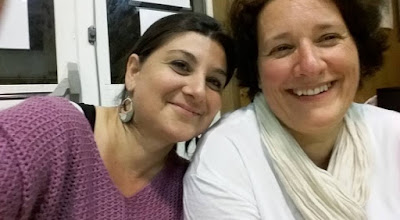 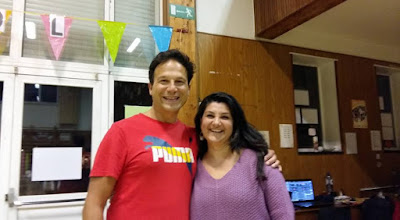 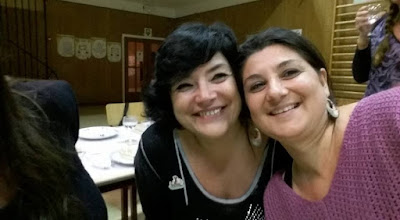 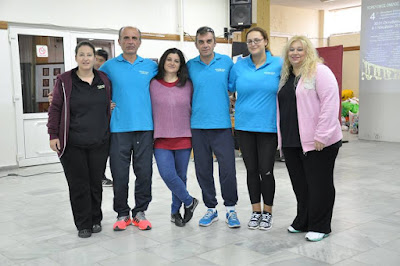 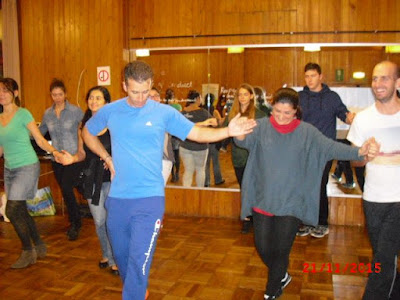 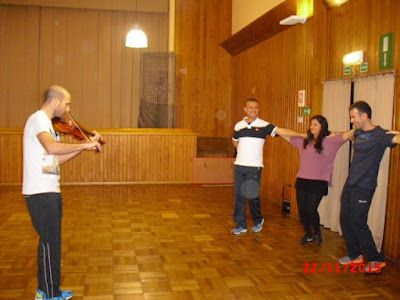 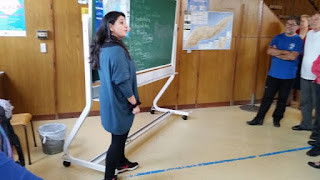 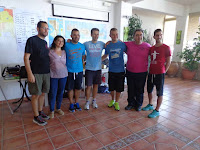 A wonderful year has gone and a more wonderful has arrived!
Some highlights of our IkariaDance friends' activities the last months of 2015 were the dance workshops/ seminars with our dance teachers in Greece and abroad, during which we had the chance to see many of you!
Christos had an amazing dance experience in Cyprus, teaching in depth Asia Minor dances to our Cypriot friends. Makis and Filippas also enjoyed a wonderful dance seminar in the association Opa Parea in Belgium with our friend Nikos Tiliakos dance company! I myself have been with Yanis and Nikos in Brussels, invited by the association Tradidanse for a magnificent dance workshop about Ikaria and Crete! In Antwerpen my dance workshop in the KaPa association's anniversary with Kalitsa Pantazis wonderful dance parea was an honour for me, alongside with our friend Annick Van Steerteghem wonderful hospitality! My dance trip to Barcelona and Granollers with the association Passaltpas has been a memorable moment meeting again my Catalan friends after many years and dancing again all the Ikarian dances and talking about how Ikaria and Catalunya have many things in common! And not to forget our friends in Kavala, in the dance association of Ioanna and Eleni and our friends there!
We were indeed enthusiastic to see so many dancing friends and share moments all of you! 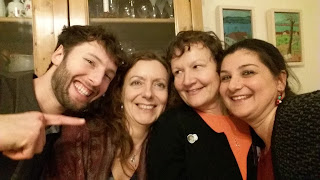 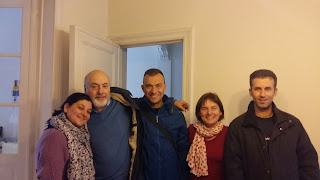 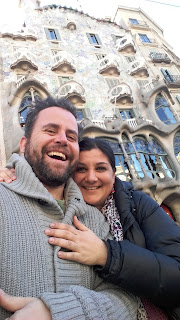 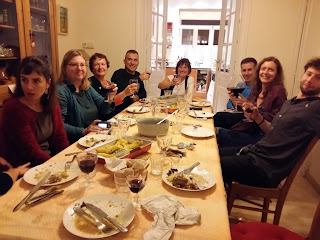 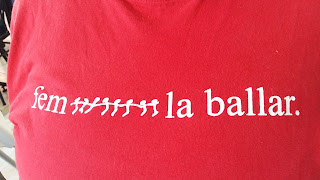 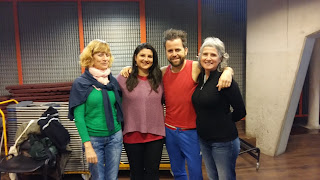 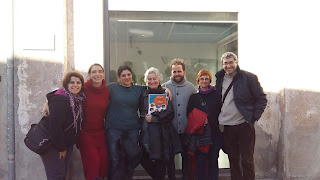 A highlight during the Christmas period was also our visit to Ikariamag wonderful art event "ARTEIS" with many events and expositions, among which our friend's Birgit Urban's photographs of Ikarian people portraits. We enjoyed especially an ikarian folk tale dramatised by the Ikarian actress Electra Tsakalia and the nice and relaxed atmosphere of the Ikaria Store!... 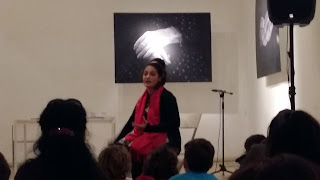 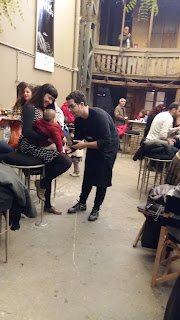 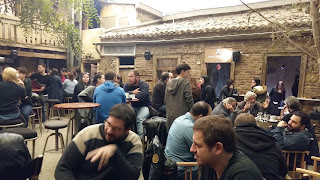