The 1st Language and Culture Project in Ikaria...

...with many ideas on various workshops on Greek language and Greek culture!

Ikaria Holidays with Christiana, Effi, Nikos, Antigoni, Layla propose a different way to learn the Greek language and come in touch with Greek and Ikarian culture and enjoy ones' holidays in the wonderful island of Ikaria. 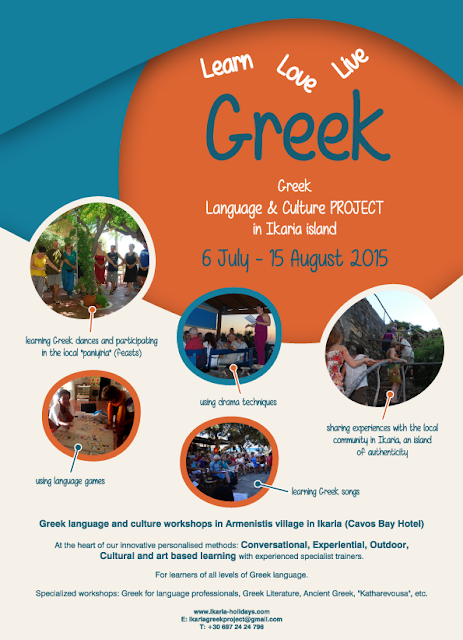 Greek language and culture workshops in Ikaria
in the village of Armenistis
CAVOS BAY HOTEL (cavosbay.com.gr)
From 6 July 2015 up to 15 August 2015

Greek for language professionals: participants with a professional interest in Greek such as translators, interpreters, academics shall develop their mastery of Greek according to their needs.

“Katharevousa” Workshop: participants shall study texts in “Katharevousa”, the form of the modern Greek language conceived in the early 19th century.

“Tragoudo” Workshop - Greek through Greek songs: Studying Greek songs as literature texts and pieces of linguistic art and communication based on a new art based concept.

“Theatro” Workshop - Greek through Greek Theatre: Studying extracts of known Greek theatre plays pieces getting in depth of Greek history & sociology. Drama activities, work on Greek pronunciation and the proxemics of the language under an innovative art base concept.

“Ikaria” Workshop: Studying texts about Ikaria and its culture from historical, sociological, anthropological and literature resources.

Our methodological orientation:
- Development of all four language skills with emphasis on speaking and listening
- Using of art and culture to consolidate vocabulary and grammar structures by singing songs, learning Greek dances etc.
- Use of drama to promote language use
- Close involvement in the unique local culture and community in Ikaria
- Intercultural activities between all participants to share cultures and experiences


Our workshops will shall take place in Armenistis, a picturesque village in North Ikaria, at Cavos Bay Hotel.


Armenistis is a small village with a picturesque harbor, its parish church dedicated to Agios Nikolaos, patron saint of sailors. Armenistis is also the starting point for several hiking tours through the fantastic mountain villages all around. You can find 5-6 nice tavernas, a couple of cafe-bars, mini-markets, small shops, a small harbor with a nice quiet sandy beach, and a long golden beach 500m away named “Livadi”.

Cavos Bay shall be our proposition for your accommodation offering special prices for the participants of our workshops. It offers a high quality personal and friendly service. Its daily breakfast buffet served on a balcony with an amazing view is an unforgettable experience as well as its two swimming pools with fresh seawater. (access for disabled, free Wi-Fi: more for Cavos Bay features) For participants who would like to stay in other locations in Ikaria, like the close villages Nas or Yaliskari, contact us for info about accommodation. (ikaria-holidays.com/)

The ILCP Language program takes an innovative approach to learning languages and developing cultural awareness on the island of Ikaria, an Aegean island with a unique natural beauty and a rich cultural heritage.
Ikaria has raised the global interest of anthropologists and sociologists due to its unique culture and high longevity rates. It belongs to one of the five so-called world “blue zones” where people age slowly thanks to various factors, among which are the strong social and cultural bonds of its people. Close contacts with this interesting culture are at the heart of our approach that involves meeting local people through conversations, common experiences and outdoor activities.
The combination of Greek and Ikarian art and culture (music, songs, dance, theatre, traditions and feasts, local gastronomy) will help you learn in a culturally and artistic based environment and in a relaxed way. “To experience and learn through cultural adventure and real emotion”, this is the motto of our team.

Ikaria Holidays agency is organizing the project with the kind help of highly experienced specialist language teachers and cultural mediators, who shall help us get in the real adventure of exploring a language and its culture.

Christiana Katsarou shares three lifelong passions, Greek language, Greek dance and Ikaria: this Project promises that she combines them all!

She is an adult trainer of language and culture holding degrees in Greek philology, in Theatre Studies and a M.Sc. in Anthropology - Greek Culture and Folk Studies. She did her research on the feasts of Ikaria. As a dance trainer she has conducted many workshops in cultural associations including LIKEIO TON ELLINIDON IKARIAS and E.TE.PO in Greece and numerous cultural associations in Europe, Canada and Israel animating workshops on Greek dance culture. She has been a language trainer of Greek as L2, a researcher in EU funded language projects and currently a trainer of the Youth and Life Long Learning Foundation for Erasmus+ (National Agency of Greece). She is an examiner for the Greek language certification for immigrants (Greek General Secretariat for Lifelong Learning).
She is the cultural coordinator of Ikaria Holidays cultural projects: the IKARIADANCE PROJECT (www.ikariadance.blogspot.gr) and the Chorotragoudo Project. She speaks English, French and German.

She received her degree in Greek philology from University of Crete and her M.Sc. in Adult Education from the Greek Open University. She is certified as an adult trainer by the Greek National Organization for the Certification of Qualifications and Vocational Guidance and she has attended many specialized seminars about teaching Greek as a foreign language (L2).
Effie has gained a Grundtvig scholarship from the Greek Scholarship Foundation (IKY) and she has attended seminars in adult education in Malta and in Latvia. Over the last 10 years Effie has worked as Greek teacher to adults in private and public organizations and has also specialized in teaching ancient Greek and “Katharevousa”. Since 2009 she is examiner for the exams about the certification of knowledge of Greek language by immigrants organized by the Greek General Secretariat for Lifelong Learning. In addition to teaching, Effie has actively participated in many conferences on adult education and she is a member of Hellenic Adult Education Association (HAEA). She speaks English and Italian.

Nikos Kouvaris originates from Karavostamo of Ikaria and is an enthusiast of his island’s culture. He holds degrees in electrical studies and in nursing and health studies. He has worked in the National Electricity Company and the Hospital of Ikaria. He loves greatly cooking, traditional dancing and nature. He has danced many years in the Likeio ton Hellinidon Ikarias and he belongs in the team of Ikaria Dance Project. He has also been involved in several projects of Ikaria-Holidays in the field of cultural tourism.

Αntigoni Riga is a young enthusiast of Drama in Education as well as her island of origin: Ikaria!

She holds degrees in Theatre Studies (Athens University) and in Acting and Performing Arts (Kimouli Drama School). She has also studied classical and modern dance in the Greek National School of Dance. As an actress and dancer she has participated in many theatre and dance performances (“Perses”, “Aloides”, “Romeo and Juliette” etc.) Since 2009 she is a member of the Zero Point Theatre Group. As a drama in education trainer she has worked in public schools and recently in the Athens University Museum’s educational projects. She speaks English and French.

Layla Luffman has moved from UK to Greece more than twenty years ago. She has lived on Ikaria for the last eight years and she loves it! She teaches English, Greek and Spanish to both children and adults. She is a linguist with a degree in language studies from the university of Cardiff and is currently studying for a Master degree in applied linguistics at the UK Open University. She enjoys teaching and she has almost twenty years of experience. She also works part time for the University of Cambridge as an oral examiner.
Her hobbies are collecting herbs and cooking. She has been running a ‘kantina’ on the lakeside in Fragma Mounte Ikarias for three years now where she enjoys cooking as well as running art workshops for children. She speaks English (native speaker), Greek, Spanish and Italian.

Information / Registration
For information upon fees and registration, please contact us at:
ikariagreekproject@gmail.com